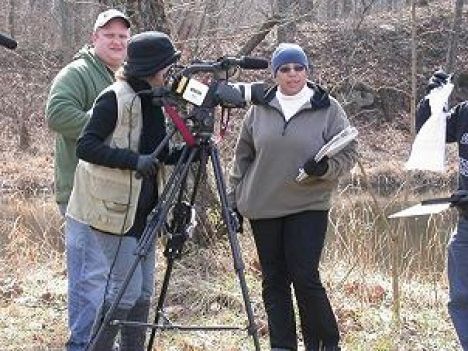 RAMONA L. TAYLOR - Producer/Writer/Director Ms. Taylor received her undergraduate degree from Duke University and her Juris Doctor from the University of Richmond T.C. Williams School of Law. Ms. Taylor served as a student assistant on the Oliver Hill autobiography, The Big Bang: Brown vs. The Board of Education and Beyond. Ms. Taylor is co-founder of Shockoe Productions and is a published writer and poet, accomplished researcher, award winning screenwriter, and producer. She currently has several projects in various stages of production including the completed feature, CAMP DOA, which premiered at the Pan African Film Festival in February 2008. Taylor is also working on the documentary, Keeping the Faith With Morrie, which chronicles the life and accomplishments of syndicated Black cartoonist and Wee Pals creator, Morrie Turner. Shockoe’s short and Taylor’s co-directorial debut (w/ son Caleb), Stop Look Listen, was a finalist in Allstate’s 2009 Community Voice Short Film Competition. Her solo directorial debut, My River Bridge, was the winner of the Professional Division for the 2009 Streaming the James Video Competition. CARL BOWMAN, JR. - Producer/Executive Producer Ever since he was young Carl has tried all kinds of performing, from ventriloquism, to dancing, singing and acting. He has played every type of character from a tap dancing leprechaun, to Horton the elephant in Seussical!, to a furry pink dog in Grim!, to the wicked witch in Hansel and Gretel, and the Fairy Godmother in Cinderella. He has played more normal roles, such as Booker T. Washington in Ragtime, Dr. Einstein in Arsenic and Old Lace, Gabriel in Shenandoah, Jim in Big River, George in Of Mice and Men, and Mr. Paravacini in The Mousetrap, among many others. Bowman has directed numerous theatrical works, including Blues in the Night and Crowns. Bowman is a multitalented professional who also enjoys editing and music composition. Bowman’s enthusiasm for life also extends to filmmaking. Bowman made his cinematic directorial debut on Class Report: Collaborative Divorce and continues with the short film, Bad Partner. Bowman is spearheading several film and documentary projects, including Boxley on Trial. CALEB TAYLOR – Producer/Executive Producer Caleb Taylor is a recent graduate of James River High School and currently attends Ferrum College, where his major is Philosophy. He has years of experiences working in independent film, new media projects and music videos, and has served as sound and camera department crew. He served on film competition and independent film crews for such projects as Dead Drop, These Old Tracks, Garden Varieties, and Veronica’s Issues. He made his co-directorial debut (with Mother, Ramona), on Stop Look Listen and his solo directorial debut, with Mediation: It’s not Just Kid Stuff. Caleb Taylor hopes to continue his film career through Shockoe.