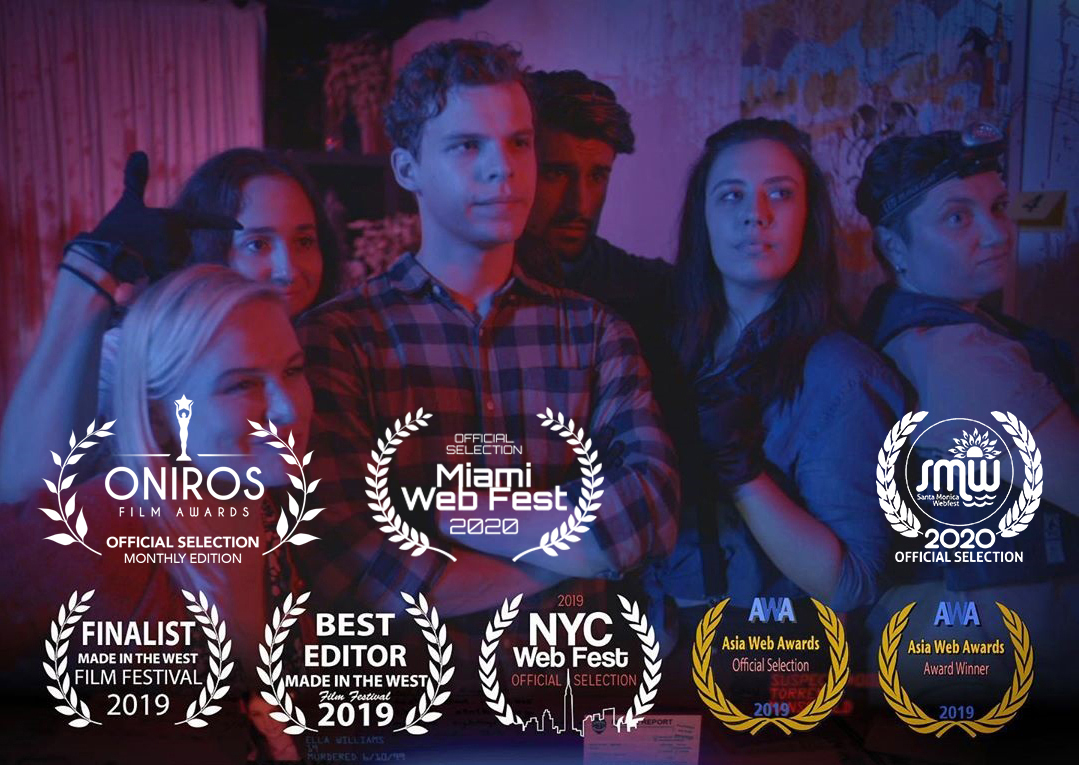 When a true crime obsessed woman comes face-to-face with a real-life murderer, she teams up with the Sydney Sleuthers, a group of armchair internet detectives, to solve her neighbor's murder before the killer gets to her first!
EPISODES

Meet the cast
Gemma Dart
The passion for performance started at a rehearsal for the musical Oliver.
Bio

Skye Patch
Skye Patch comes from an artistic and bohemian family. She started out as an actor on The New Adventures of Flipper and aims
Bio 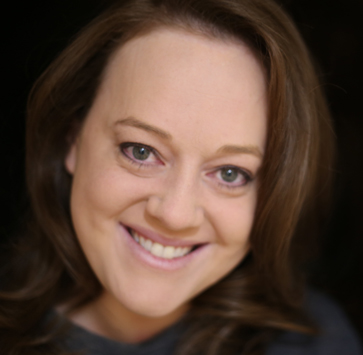 Jo grew up in the rural town of Gilgandra, Australia. She fell in love with filmmaking when she was 13 and started planning the remake of .....
READ MORE >

Nicole is a Writer, Director and Producer and graduate of Sydney Film School with a passion for high concept story telling and world building...
READ MORE >

Ivy has worked in the Australian film and television industry for the last ten years both in front of the camera and behind the camera....
READ MORE >

Nicole is a Writer, Director and Producer and graduate of Sydney Film School with a passion for high concept story telling and world building. She has seen great success in developing projects alongside fellow creative Joanna Beveridge and together they are a force to be reckoned with.

Most recently, her short film 'Magnetic', which she wrote and directed, is premiering at the Sydney Film Festival 2019 and she had two pilot scripts listed as semi-finalists in the 2019 BlueCat Screenplay Competition. On top of this, her achievements include being a grant recipient of the Create NSW Screenability Filmmakers Fund, winner of the Create NSW & Screenworks 'GO VIRAL' competition, shortlisted for the ABC DisRupted Initiative, semi-finalist in the Fade In Awards, longlisted for the Australian Writer's Guild John Hinde Award, and is the Producer, Writer (3 eps) and Director (2 eps) of 'Sydney Sleuthers.'

Nicole has worked in many industries including marketing, teaching English in Vietnam, and being an advanced gymnastics coach, through which she has met people from all walks of life. In creating and producing, she draws on this varied life experience. She aims to produce meaningful, thought-provoking and original stories which represent all members of society on screen.

Jo grew up in the rural town of Gilgandra, Australia. She fell in love with filmmaking when she was 13 and started planning the remake of Lord of the Rings. Jo would ride her horse to her friend's house, pull out some lembas bread (grilled toasted condensed milk sandwich) and start planning. She always knew she wanted to be a director, except that's a lie. She studied Nuclear Medicine straight out of school. Okay, so 18-year-old Jo didn't have it all figured out. But after completing that degree she FINALLY knew what she wanted to do!

Since then she's completed another degree, worked at Network Ten, learnt the ropes of the television industry as a Promotional Producer, worked at ITV Studios as a Digital Editor, done note-taking in a writer's room for Easy Tiger and now she's a Creative Producer at NBCUniversal. The short film she produced, 'Magnetic' is screening at Sydney Film Festival. The pilot script 'Realbots' that she co-wrote with Nicole Delprado has been shortlisted for numerous competitions including the BlueCat Screenwriting Competition and she recently won the Screenworks Go-Viral competition to shoot her comedy short 'Fempocalypse', which she co-wrote with Nicole Delprado.

At the end of the day Jo is a firm believer in learning by doing. She's a huge advocate for diversity on set and always strives for a fun, friendly, no-ego, safe production. Above all she wants people to feel comfortable on set so they can try things and reach their full potential.

Ivy has worked in the Australian film and television industry for the last ten years both in front of the camera and behind the camera. She has written and produced short films that have been screened internationally - MERMAID AND THE CITY (WOW Film festival, Sydney), WHY ULA LA IS SO GOSH DARN CUTE (New York's Iron Mule Comedy Festival), SHE (Chicago International Film Festival- winner of Gold Plaque) and F#!@ING MOSQUITO (BOFA Film Festival, Launceston). She has worked in development as Drama Development Coordinator at Essential Media and Entertainment and is currently co-producing a 6 x 1 hour comedy mystery series, LUCKY LEE, in development with Easy Tiger, an award-winning production company in Australia.

The passion for performance started at a rehearsal for the musical Oliver. Being too young to audition herself, Gemma sat and watched her as her sister and dad at every rehearsal, captivated by the art. She auditioned that next year, being the ripe, permitting age of 8, and joined the theatre company, spending the next 10 years immersed in stage performance. After finishing school Gemma branched out into the film industry, graduating from NIDA's Actors Studio for Screen in 2017 and signing with Duke Actors Management shortly after. She has since been landing supporting and lead roles on screen; her most recent project Magnetic has been selected for Sydney Film Festival 2019.

Danielle Stamoulos is a Greek Australian actor and writer raised in her south-western Sydney home of Punchbowl (Australia). She's worked across film and stage; currently starring as Witney in Sighence Projects' comedy web series Sydney Sleuthers (2018 Filmaka pilot winner), short doc Shading (Diversity Arts Australia/Vonne Patiag) and appeared on Love Child (S4/Channel 9). For stage:To Be Honest (Bankstown Arts Centre), EI8HT at 2015 Sydney Fringe Festival, The Canterbury Tales (The New Theatre) and the critically acclaimed play SLUT by Patricia Cornelius. Danielle's indie theatre company Edgeware Forum of which she is a proud co-artistic director of co-produced SLUT and received a 2016 Sydney Theatre Award nomination for Best Ensemble cast at WITS Festival Fatale. Danielle is also a 2013 graduate of Actors Centre Australia with an Advanced Diploma of Performing Arts (Acting). Danielle recently worked as one of the writers on the upcoming ABC web series Halal Gurls, she was also selected as one of the two emerging producers for Co-Curious/Emerald Productions's Behind Closed Doors program and worked as a Script Coordinator on ABC/Netflix comedy The Letdown. Danielle is passionate about creating stories for film and stage that focus more on authentic female perspectives from different generations of the cultural diaspora. She also loves to write poetry as well as obsess over supernatural and fantasy fiction in her spare time.

Chris Bartlett (Tom) is an actor & graduate of NIDA OPEN's screen acting course. Passionate about telling stories that connect, inspire and stimulate audiences, he works across film and theatre. He recently played the role of Mike in the web-series Now Leaving Cordura, and also appears in the feature film Life After Man.

Chris Bartlett (Tom) is an actor & graduate of NIDA OPEN's screen acting course. Passionate about telling stories that connect, inspire and stimulate audiences, he works across film and theatre. He recently played the role of Mike in the web-series Now Leaving Cordura, and also appears in the feature film Life After Man.

Cass started getting the acting bug from an early age. School plays, Rock Eisteddfods (winners), local amateur theatre (thanks for driving me Mum) all helped in her desire to entertain and perform. Moving from her hometown of Newcastle to Sydney she found roles in ads, tv, short films, feature films, documentaries and a web series. Grateful as always for the opportunities, Sydney Sleuthers will always be that little bit more special. Having a part in creating a character called Dot was truly a dream and something that she will always treasure. (Love you ladies x) Cass would like to also explore more roles with diversity and inclusivity and loves being inspired by other creative minds.

Skye Patch comes from an artistic and bohemian family. She started out as an actor on The New Adventures of Flipper and aims to live creatively through a variety of arts including screenwriting, acting and teaching. Often swinging between dark dramas and light comedy, Skye likes to pursue good quality work that either makes a statement or provides people with a light-hearted sense of perspective.

Guillermo Williams Serrano is a half Spanish, half British actor currently living in Sydney. Guillermo is currently studying Meisner under Billy Milionis at the Actors Pulse. He comes from a family of writers and artists and has spent a lot of time in Spain, England and China. Curious about life he loves cooking, languages, other cultures and coffee. When not acting, he can be frequently found reading in a cafe, boxing at the gym, or eating in every nook and cranny he comes across.