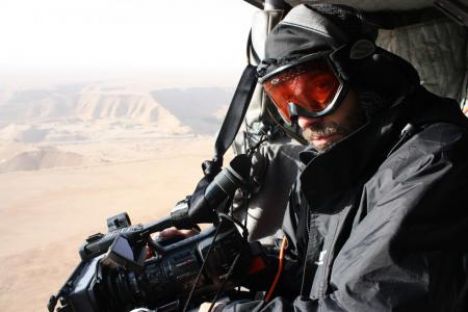 I not only make films, I live, breath and eat films (perhaps not the best menu but I recently have switched over to a low calorie digital acquisition diet). I started in the industry working for my family (my father and brothers are filmmakers), moved on to become a union camera assistant (Law and Order: SVU, Sopranos), then finally launched my independent career making commercials and films for a varied stable of clients. I've shot, directed and produced for Quiksilver Int'l, National Geographic Channel and the History Channel. I currently have some films on the festival circuit (a feature I shot and a short I directed), have won awards for my documentary work, music videos and short films and have had some distributed throughout the world. My most recent client is located in the Kingdom of Saudi Arabia. I traveled there to produce, shoot and edit a documentary on a UNESCO (United Nations Educational, Scientific, Cultural Organization) site. I have shot in Patagonia, Indonesia, France, Germany, Greece, Romania, Saudi Arabia, El Salvador, Costa Rica and every corner of the good old U.S. of A.. Currently I'm finishing a series of bio pics for a TV series (Gusto), A goth thriller feature (Long on the Island), two music videos (one for Pigeonhed) and learning how to tap dance (joking of course, I can't dance...). My experience in the studio system has enabled me to fully develop my skills as a filmmaker. In today's market you have to wear many hats and know how to run a set from any angle. My father brought me up in the edit suite, I was in a crib next to the steenbeck with a pacifier. I thrive on the endless diversity and the constant challenge this industry throws at you. Every project allows me to explore new ways to satisfy the needs of my client and in doing so continually express my imagination and creativity.