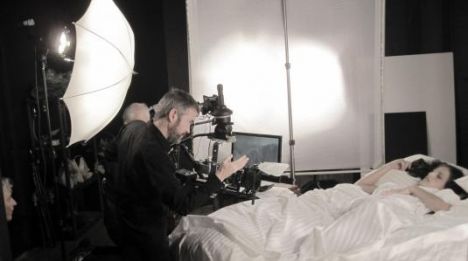 Jeffery T. Schultz has been making films since 1992, when he directed his first film and mockumentary, “The Accordionist”. Since then, he has either directed or been the director of photography on eleven films. In 2002, as director of photography, Jeffery won a Bronze Telly Award for the short film “The Brink”. In 2004, he won a Public Benefit Corporation Grant for post production work for “In a HeartBEAT: The Story of Mosaic Youth Theatre” which also won a Michigan Emmy for best Cultural Documentary under the name “And They Flew: The Story of Mosaic Youth Theatre” in 2006. A graduate from the College for Creative Studies, Jeffery primarily studied fine art photography and sculpture; during his studies he spent time at Emily Carr University of Art & Design in Vancouver where he studied film. He is currently represented by PLG-ART: The Longstreth Goldberg Gallery in Naples, FL. The depth and texture he has developed in his fine art and fashion photography can be seen in every frame of his film work. In 2007, Jeffery teamed up with production designer/producer Jennifer Atanasovski and writer/art director Lindsey Sherline to form the film production company KNAGENFILMS. They began their collaboration with a short, slow motion film called “Intersection”. In addition to helping other filmmakers get their productions completed, the team has combined efforts for commercial clients as well, including: Ford, BlockBuster, Laser Eye Institute, Mangrove Technology Group, Beckwith Floors, Atwater Brewery, Dirty Dolls Lingerie, and Lady Janes. In the meantime, their collaboration and love of film continue with “Bare Witness”, a short film written and directed by Jeffery T. Schultz, set to premier early summer 2010. Currently, Jeffery and his team are in development on their first feature length film "Dr. Boom" written by Jeffery T. Schultz, a co-production with Emmy Award winning filmmaker/producer Charles Cirgenski and Zone V Productions which will be produced in Michigan later this year.