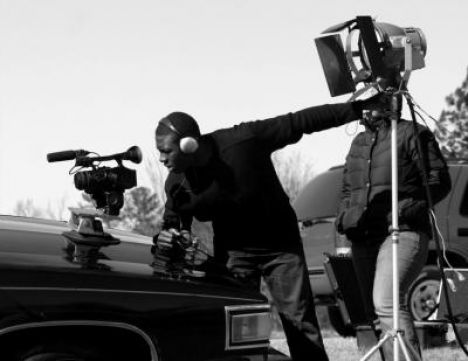 A nomad moving through the depths of life’s junctures, filmmaker Carlos Ramsey is forever uncovering the subtleties of human existence most people overlook. This uncanny quality defines his brilliance. While most adolescents are imprisoned in a monotony of repetition – shuffling between school and home – Ramsey was living a bi-coastal lifestyle, absorbing the cultures of New York, LA and Atlanta. It created a unique way of life rooted in artistic expression. Upon him settling in the Peach State, the burgeoning artist never looked at life the same way again. Ramsey began developing his creative eye in high school, competing in short film contests and winning first place in the state promotional video competition for the Technology Student Association (TSA) and garnering third place in the national competition. Already an accomplished young filmmaker, it was only natural for Ramsey to establish his own production company, Made You Look Films, along with fellow Atlanta Art Institute classmate, Dwayne Beckless, while in school. Less than a year of Made You Look’s inception, the company was commissioned to produce its first music video. The project was for hard rock artist, GWC, which featured high-end technology, a rare nuance for a couple of film students. It was the break Ramsey was looking for. The video caught the attention of MTV, VH1 and a variety of industry power players, positioning Made You Look Films on the cusp of stardom. The Made You Look catalogue includes projects for Armani Exchange, Champs Sports and music videos for Sony Records chart-topping artists. In 2005, Ramsey wrote, directed and produced “The Test,” starring Australian pop icon Selwyn, with cameos from techno king Moby and MC Safire. The film is an advertising paradise, featuring a plethora of product placements for brands Audi, Apple Computer, and Motorola. It created a cult following, provoking Ramsey to venture into film features. After producing two film shorts, “2 Saints of the Storm” and “Maid in America,” Ramsey teamed up with multi-platinum R&B artist Usher to produce a behind-the-scenes documentary on the singer learning to tap dance for his remake of the Gene Kelly classic, “Singing in the Rain”. While filming in Los Angeles, Ramsey began to extend his company, making it a full service bi-coastal production company. With his elite industry connects, Ramsey is currently developing several feature films. Always an innovator, he’s entering into web series for the Internet and mobile phones with the vision of becoming a global phenomenon.