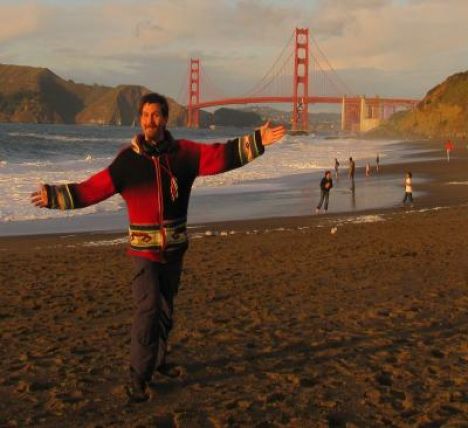 A native of Detroit, MI., I moved to sunny California in 1994, bringing along my years of experience in baking, daydreaming, film, theatre, television and my insatiable drive for new experiences and exploration of other pragmatic and creative art mediums. Beginning at an early age it was clear that I had quite an imagination and a natural talent and passion for the arts. I first experienced the rush of adrenaline on stage during my first grade talent show. I was fascinated with ventriloquism and thought to put my would-be talents to the test. Always an imaginative dreamer but not such a great ventriloquist, I was a hit but not just because my jokes were funny. My mouth was moving faster than my finger could pull the string. Losing my enthusiasm for ventriloquism after seeing the film Magic on T.V I turned my interests to theater and making films with my uncles super8 camera in my Grandmothers basement. I have many a horrific and inspiring memories from those times. My passion never waning in 1994 I took a solo drive across the United States to move to a state and city I had never set eyes on, except in the movies, Los Angeles, California to pursue my endless romance with film and theater. Since then I have had the pleasure and experience of cultivating a life long involvement in theater and film making. With my love for travel and years of entrepreneurial experience I have built a strong foundation for the arts, business and an eye for artistic innovation. In 2000, my innate talent for organization put me on the fast track to produce visual effects with Radium for the cult television series "Buffy the Vampire slayer" and "Angel". I was awarded Best Experimental Film for my 20min short film "Pills" at the 2001 First Glance Film and Video Festival, L.A. While continuing to hone my theater skills with a variety of theatre companies in Los Angeles and New York I became a Published playwright. Having had the honor of writing a critically acclaimed one act play, "True Love," produced in 2002 in New York Cities Emerging Artists Theater off, off Broadway.. In 2006-07 I traveled to Europe and Cameroon, Africa as Production Manager and Artistic Director for "Lake God," (www.LakeGod.com) an original and inspiring film project which included the production of a feature film, documentary, cooking show, music production and humanitarian efforts. I served as director, writer, and production manager for "Flavors of Africa"--a unique cooking show, shot on location in Cameroon, Africa, and the United States, that explored African cultures through its cuisine. Continuing to utilize my talent and experience I was a founder of www.iRealtour.com. A web based business providing multi-media marketing and web services for high end real estate in Los Angeles, Ca. Developing from the ground up, the business, business plan, production design, website - text and content as well as securing funding. Having lived in various cities throughout California, From L.A. to the Bay Area, I have collaborated with a wide range of talent to help establish EyeQ Films, with locations in Venice Beach, Alameda, and El Sobrante, Ca, as an up and coming creative and service oriented Production Company. I continue to serve in a wide range of capacities for EyeQ Films including writer, director and producer. I am blessed and honored to be able to fuel my insatiable passion, hone my skills, nurture my creative spirit, and growth with the continual support and inspiration from a culturally diverse and multi-talented family that is EyeQ Films. Thank You!