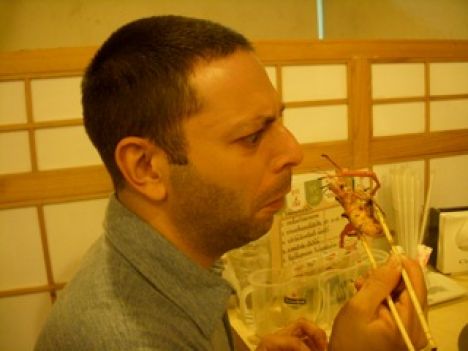 Alec Christie is an actor, writer, director and producer from London. He has worked professionally in the entertainment industry for over thirty years in film, television, radio, theatre, advertising and events. Alec currently works as Senior Producer at Spring Studios in London specialising in creating high end content for fashion, beauty and luxury brands. Alec trained as an actor at the Leyland’s Academy of Speech and Drama, the Ashcroft Arts Centre, The National Youth Theatre, The Birmingham Theatre School, The Actors Centre and the Impulse Company. Between 1984 and 1993 Alec Christie worked professionally in front of the camera appearing on stage as Herbert Pocket in Great Expectations for the Birmingham Repertory Theatre, in The Children of Green Knowe for the BBC, in the feature film The Whizz Kid, the sitcoms A Kind of Living, The Office and Last Chancers, the comedy pilots No Skillz and The Secret Life of a Nebbish and on various radio shows and documentaries as a voice over artist.

Alec studied film at the University of Warwick with a view to working on the other side of the camera as a producer and director. He studied Drama and the Scripted Play as part of his film degree. After graduating he trained as a writer and director with the Impulse Company and Living Pictures at the Actors Centre, London. He went on to attend the Film Lab programme run by Denis Lawson at the Actors Centre. Alec finished his training with Arista Development and the Soho Professional Screenwriters course. Alec has written several screenplays, short films, comedy pilots, comedy sketches and copy for educational DVDs. Alec recently completed the screenplays Sea Demons and Actor Factor. He also has the screenplays Infomercial Guy, The Meter Reader, The World Turned Upside Down, Snare and The Trial of William Buckle in development. Alec started in working in film production in 1997 on feature films, TV drama, factual and entertainment and theatre before moving into live events, commercials and short form content for integrated digital campaigns. He has filmed in Europe, the United States, the Middle East and the Far East. He is currently directing films for the Six in Twelve series and performing as the comedy character Malcolm of Malcom’s Cafe.

Send Friend request to B

Send Message to B